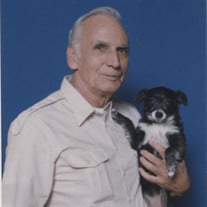 Edward James Alberson Jr., 88, of Barstow, died April 10, 2021 in Redlands of surgery complications. The second of four children, he was born Dec. 11, 1932 In Gene Autry, Oklahoma to Edward James Alberson Sr. and Odessa (Edwards) Alberson. In 1937, his family moved to the Central Valley area of California, where they worked in agriculture. During World War II, they relocated to the San Francisco Bay area, where Edward's father worked at the shipyards in Oakland. In 1946, they moved to San Jose where Edward graduated from San Jose Technical High School. He joined the U.S. Air Force in 1953 and was stationed in Tucson, Arizona as an aircraft mechanic. He married Wanda Stilley of Oklahoma in 1957. Their eldest daughter Brenda was born in 1958 in Texas. The family of three moved to Redlands, California. Daughter Candace was born in 1959 and son Edward III in 1962. Edward Jr. worked for several years for Kaiser Steel in Fontana, testing steel samples. Later in life, he worked many years in the security field. The family lived briefly in Texas before moving to the San Jose area and then later to the Central Valley before returning to Southern California, including Chino and Montclair. After the couple divorced in 1990, Edward lived in Ontario where he met his future partner in life, Wilma Garland. They also owned a home in Lake Isabella, where Edward continued to live for several years near his two sisters after Wilma's death in 2003. Edward lived briefly in San Jose when his sisters relocated there, and he became a resident of the Veterans Home of California in Barstow in 2013. He is survived by his daughter Brenda Dunkle and her partner Steve Aubin of Kingman, Arizona; son Edward James Alberson III and his husband Manny Munoz-Alberson of Upland; sisters Betty Reeves and Minnie "Evelyn" Robinson, both of San Jose; brother Richard Alberson and his wife Judy of Redlands; many nieces and nephews; and good friends Judy and Steve Hasko and their nephew Michael Sheldon, all of Barstow. A memorial service with military honors will be held 10:30 a.m. Thursday, May 20, 2021 at Riverside National Cemetery, 22495 Van Buren Blvd., Riverside. Arrangements were provided by Aaron Cremation and Burial Services in San Bernardino. Memorial contributions may be made to military veteran causes or charities helping animals.

Send flowers to the Alberson family.