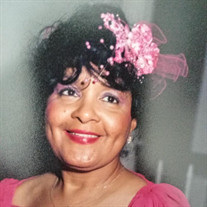 Gloria Ferrell, age 88, of Spring Valley Lake, passed away February 17, 2021, in the care of loving medical workers, doctors and nurses at Loma Linda hospital in Loma Linda, California. Her daughter and son-in-law (her caretakers for 6 years) also expressed their love for Gloria and sent her kisses and blessings everyday via Zoom visits. Renee and Dwayne told Gloria that they love her and could visually see each other at Loma Linda Hospital. Gloria always asked Dwayne to pray for her and he happily prayed for her all the time. Soon after she received JESUS CHRIST AS HER LORD AND SAVIOR. Gloria was also able to Zoom visit in the hospital with her sister Carlotta. Gloria and Carlotta were very close and they had a special relationship. Carlotta lives in New York and visited Gloria all the time. Carlotta and Gloria expressed love for each other and that made her happy. She also spoke with her sister Barbara from New York and said “Mama was a good mother” and the sisters expressed love for each other. In a time where many people have fallen to a terrible pandemic, (Covid 19) Gloria’s passing was caused by many other health complications and GOD decided to bring HIS angel home. Gloria Ferrell was born in New York on July 4, 1932. Her parents were Theodore Roosevelt and Carlotta Lowrie. A.K.A. Teddy and Mama. Gloria is one of many siblings. Gloria’s brothers and sisters are: Theodora Lowrie, Theodore Roosevelt Lowrie Jr., Robert (Bobby) Lowrie, Carlotta Rembert, Barbara Irvine, Raymond Philip Lowrie and William (Billy) Lowrie. Gloria was the eldest daughter. Gloria has two adult children and four grand children that survive her. Renee Smith is her daughter/caretaker and Warren Richards is her son. Her grand children are Rick, Devin, Brandon Smith and Brenden Richards. She also has a son-in-law, Dwayne Gordon/caretaker, who she playfully called her “adopted son”. On any good day you could find Gloria Ferrell shopping at any outlet or mall for extra items that she rarely needed. Gloria was known for having extras stored in her garage for any type of emergency or need. Gloria was the “bell of every ball” and the “light in every room”. Gloria enjoyed cooking home cooked meals for her family whenever they were in town. Gloria was a “shining superstar” and “well liked” by everyone. Gloria moved to California in the 1980’s. Although from New York, Gloria truly loved the California lifestyle and made sure to soak up all the sun while gracing us with her presence. Gloria (through her daughter Renee) met many celebrities and politicians from Bobby Brown {who called her “Momma”) to Congresswoman Maxine Waters. Gloria was extremely proud of her grandson, Brandon Smith’s many achievements. She was especially delighted of his being honored as “Young, Gifted and Black” at the 33rd CONGRESSIONAL BLACK CAUCUS FOUNDATION’S LEGISLATIVE CONFERENCE in Washington D.C. Brandon sat on the panel with the Reverend Jesse Jackson and Congresswoman Maxine Waters, along with other dignitaries. Gloria would make the most unpredictable strides in her own mindset. Although she did not care for animals as pets, she allowed a neighborhood cat to grow on her heart and eventually adopted and started to take care of it. She really took pride in her independence, which only makes it right that she befriended an independent friendly neighborhood kitty. Renee & Dwayne prepared for a "Celebration Journey" in a 58-foot Luxury Yacht for Gloria’s “Home-Going at Sea”. Gloria Ferrell… A Mother… Mother-In-Law…Sister… Grandmother… Great Grandmother... Forever loved & Forever missed… You are an angel in our Hearts Forever… July 4, 1932 - February 17, 2021

Gloria Ferrell, age 88, of Spring Valley Lake, passed away February 17, 2021, in the care of loving medical workers, doctors and nurses at Loma Linda hospital in Loma Linda, California. Her daughter and son-in-law (her caretakers for 6 years)... View Obituary & Service Information

The family of Gloria Ferrell created this Life Tributes page to make it easy to share your memories.

Send flowers to the Ferrell family.