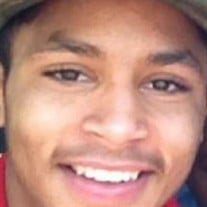 Kinji Siraj Beharry-Harris was born July 4, 1995 at Cedars Sinai Hospital, Los Angeles, California, the son of Rondy Harris and Maya Beharry-Johnson. His early education was at Rosewood Elementary (Los Angeles), Sugar Hill Elementary (Moreno Valley), Vista Heights Middle School (Moreno Valley), and he graduated from Taft Charter High School in Woodland Hills, California. Growing up, Kinji enjoyed all sports and played and excelled in t-ball, baseball, and football. He especially liked playing on the football team his father coached, but it was a football accident that sidelined him and caused him to lose interest. He was not only athletic, but also smart, talented and outgoing. His recent DNA test revealed a myriad of countries (Northern and Southern India, Nigeria, England, Ireland, etc.), and like his DNA, Kinji’s interests and friends were the same. In high school, he selected Korean as his foreign language of choice. Again, he excelled, writing a winning essay about Korea in 2012 that offered him a monetary prize as well as the opportunity to visit and study in Korea for the summer. His interest spanned the gamut, and it seemed difficult for him to settle on a specific career. Even so, he attended Riverside Community College maintaining a 4.0 GPA. Kinji was definitely a firework! He was always the “life of the party” and could light up any room he entered. His mom had nicknames for him that were truly expressions of his personality: “Video” for his passion of “Call of Duty” as well as his many Instagram videos full of life and music and all the other things and people he enjoyed. The other, “BOP BOP” for his firecracker ways. He was an amazing person with a smile and personality to match! Everyone who knew him loved him, and he will be forever missed and loved!!! NO DAYS OFF BABY – UNTIL WE MEET AGAIN!!! He leaves to mourn his mother, Maya Beharry-Johnson (Richard); Father, Rondy Harris (LaJuan); Stepfather, Michael Burns (Marlene); Stepmother, Paris Murphy (King); Stepmother, Elonda; Stepmother, Michaelynn; His grandparents, Jeanne Beharry, Sherry and Rondy Harris and wife. His siblings Nija Murphy, Kahmone, Destiny, Cheyenne, Anaya, Michael, Jaylin, Devin, Maya Lin, Richard and Ahsha, Kayden and Sevyn; Aunts and Uncles, Gina and Ronald; Yahne and London, and a host of cousins and close relatives and friends.

The family of Kinji Beharry-Harris created this Life Tributes page to make it easy to share your memories.

Send flowers to the Beharry-Harris family.